I’ve been thinking through the Gospel of John recently. Here are some of my thoughts and some information about a set of 22 video lectures on John that I just did for biblicalelearning.org. Also news about an opportunity I have to teach John this fall.

John the Spiritual Gospel
Anyone who carefully reads the four Gospels notices the uniqueness of John. It’s well-known that John differs from Matthew, Mark, and Luke—the synoptic Gospels—when he tells about Jesus’ clearing the Jerusalem Temple near the beginning of the story instead of near the end. John also leaves out familiar scenes from the synoptics like the kingdom parables and the exorcisms and the institution of the Lord’s Table. Yet John’s uniqueness is deeper than this sort of thing—it pertains to the very mood or atmosphere of the book, the “air” we breathe as we read it. This subtle yet profound uniqueness of the Fourth Gospel has been noticed since the early days of the church. According to Eusebius’ Ecclesiastical History 6.14.7 (325 CE), Clement of Alexandria (c. 150-215 CE) spoke of John writing a “spiritual Gospel” after Matthew, Mark, and Luke had already written about the “outward” matters related to Jesus:

Finally John, when he realized that the external facts had been made clear in the Gospels,
[τὸν μέντοι Ἰωάννην ἔσχατον, συνιδόντα ὅτι τὰ σωματικὰ ἐν τοῖς εὐαγγελίοις δεδήλωται,]
being encouraged by his friends and inspired by the Spirit, composed a spiritual Gospel.
[προτραπέντα ὑπὸ τῶν γνωρίμων, πνεύματι θεοφορηθέντα πνευματικὸν ποιῆσαι εὐαγγέλιον]

Clement had drunk deeply from the well of Greek philosophical dualism of flesh and spirit, and this influenced his approach to John. He looked at texts like John 3:6 and 6:63 in this dualistic way, but I can’t go there. John’s Gospel has Jesus getting physically hungry, thirsty, weary. John doesn’t portray Jesus as a merely spiritual being, and the the synoptics don’t portray only the material side of Jesus—he obviously speaks of spiritual things in those Gospels. But Clement was clearly onto something with his “spiritual Gospel” moniker for John, and his distinction between outward events and spiritual realities shouldn’t be dismissed. For one thing, Johannine prose is not pedestrian or prosaic but filled with poetic images. What’s more, as we see below, John creatively packs the historical details of his story with symbols and metaphors that convey transforming truths to his readers.

Maybe Clement would agree with this interpretation of John’s “spirituality”: Matthew, Mark, and Luke focus directly on the words and deeds of Jesus, and John focuses more on the transforming truths that those words and deeds embody. John is the spiritual Gospel, yet its epicentral keynote affirms that God’s ultimate self-revelation is the Word who became human to embody the glory of God and thereby explain it to humans: “the Word became flesh and lived among us. We saw his glory—the glory of the unique one who came from the Father—full of grace and truth” (1:14; cf. 1 John 4:2; 2 John 7). Jesus came to earth from the Father’s very presence to explain the Father to us (1:18). Seeing him amounted to seeing the Father (14:9). Touching him was as close as a finite creature could ever come to touching the infinite Creator (20:28; 1 John 1:1-2). The spiritual Gospel is not an immaterial Gospel but an incarnational Gospel. Only the somatic (fleshly) Jesus could convey the pneumatic (spiritual) realities John intends to convey. Jesus’ becoming flesh reaffirms God’s original evaluation of creation: “it was [and still is] very good” (Gen 1:31).

John at the Zoo

So, what does the spiritual/incarnational Gospel have to do with the zoo? In the early church, the four Gospels were viewed as analogous to the four living creatures in the vision of Ezekiel 1 (1:5, 10; see also Rev 4:6-7). Art and architecture which portrays this fourfold analogy is called tetramorphic. Ezekiel’s creatures had four faces—a human face, the face of a lion, the face of an ox, and the face of an eagle. Early Church writers do not always agree on which Gospel was to be associated with each of the faces, as can be seen by comparing Irenaeus’ Against Heresies 3.11.8, Jerome’s Preface to the Commentary on Matthew, and Augustine’s Harmony of the Gospels 1.9. Commonly Matthew was associated with the human face, apparently because Matthew begins with Jesus’ genealogy. Mark begins with John the Baptist crying out in the desert, roaring like a lion as it were. Associating Luke with the face of an ox was likely due to Luke beginning with Zechariah the priest in the Temple and the prevalence of Jerusalem and the Temple throughout Luke-Acts. The lofty simplicity of the language of John’s prologue about the Word-become-flesh soars majestically over the reader like an eagle soars over the treetops. This comparison of John’s “spiritual” nature to an eagle soaring through the air, high over the pedestrian world, underlines John’s uniqueness. John’s simple yet soaring language is laden with symbols which show Jesus to be the Messiah anticipated by the Old Testament. Craig Koester’s book Symbolism in the Fourth Gospel (Minneapolis: Fortress, 2003) is very helpful on this. 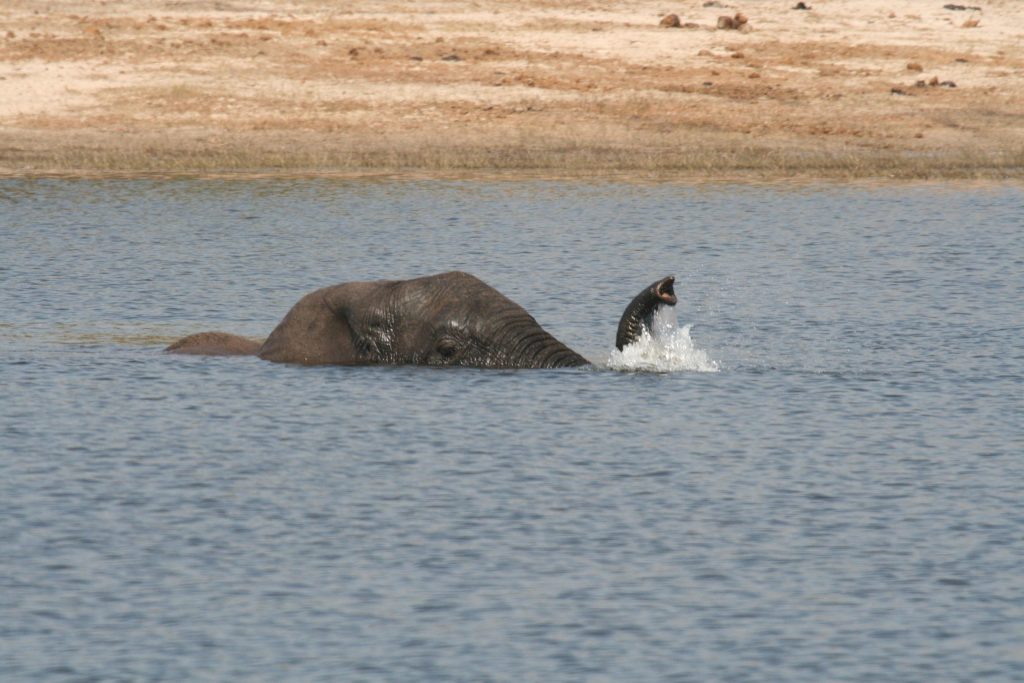 But there’s more when it comes to John and the zoo. Have you heard it said that “The Gospel of John is shallow enough for a child to wade in it, but it’s deep enough for an elephant to swim in it”? There are variations in this saying. Sometimes it is applied to the whole Bible, not just John, and sometimes the elephant becomes a horse. Unfortunately, sometimes the story sometimes has the elephant (or was it a horse?) drowning! This rather fluid saying is commonly attributed to Saint Augustine or Charles Spurgeon, but it probably goes back to Gregory the Great (Pope Saint Gregory, c. 540-604). In the introductory letter of his Moral reflections on the Book of Job, Gregory pondered how Scripture stretches the minds of the wise and nourishes the minds of the simple. He applied this to his own manner of expounding Job. He went on to say that Scripture is like a river that has shallow parts where a lamb may wade and depths where an elephant may swim: Quasi quidam quippe est fluvius ut ita dixerim planus et altus in quo et agnus ambulet, et elephas natet. Although we have apparently reached the headwaters of this saying about John as a river, I have to say the analogy does not really hold. It is not that John like a river has both shallow and deep sections, the former for simple Christians and the latter for those more advanced in the faith. Rather, all of John is both simple enough to be understood adequately by any follower of Jesus, and all of John is profound enough to provoke life-long reflection by every follower of Jesus.

Case Study: “Judas went out immediately, and it was night”: Physical Activity or Spiritual Lesson?

One of the most somber moments of John’s Gospel is found in John 13:30. Jesus has just washed the disciples’ feet. This was an act which modeled humble service and previewed the cleansing redemption of the “hour” that had come—the cross and the resurrection. Jesus lamented his betrayal as a fulfillment of Psalm 41:9 (13:18). The betrayer is subtly identified as Judas takes the morsel from Jesus and abruptly departs just as night falls (13:30). So here’s the question—should we process this information as chronology or theology? Reading John in terms of “external facts” leads us to take this as a statement of when Judas left the fold of the disciples to betray Jesus. Reading John as the “spiritual Gospel” leads us to take this as something more, as a statement of why and how Judas left, as a benighted person about to facilitate a sin-darkened conspiracy. Sadly, Judas had not grasped Jesus as the light of the world (John 1:4; 8:12) and was still walking in darkness (John 1:5; 3:2; 9:4; 11:30; 19:39; 21:3). John does not use this web of metaphors to remove Jesus from the material world in order to heighten his spiritual impact. Rather, John depicts how in God’s providence, the very time of day portrays the type of act that Judas was performing. Augustine’s terse comment on John 13:30 well-characterized the sadness of this situation: “‘it was night’: and he who went out was night” (Homilies on the Gospel of John 62.6: “‘erat autem nox’: et ipse qui exivit erat nox.” Judas’ unspeakably evil breach of Jesus’ trust (darkness) sets the scene for Jesus to immediately teach the disciples that their faithful love to one another (light) must be modeled on his love for them (13:34-35), which itself was modeled on the Father’s love for Jesus (15:9; 17:23). John’s chronology is theology; in John outward circumstances portray spiritual realities.

Jumping into the Deep End of the Pool

Although I’ve spent a lot of time in the Gospel of Matthew, I’ve also been challenged and blessed with opportunities to wade with the lambs and swim with the elephants as I studied and taught John. I recently finished “taping” 22 video lectures on John with Prof. Ted Hildebrandt of Gordon College for his great site biblicalelearning.org. Ted has compiled video lectures from about 30 scholars on a wide array of biblical books and topics. Much quality seminary-level teaching is available free here for those who are unable to undertake a formal program of study. I’m honored to participate with the others on this site. My lectures present a variety of perspectives on John, ranging from John’s genre to linguistic issues, literary structure, geography and social-historical matters, John’s allusions to the Old Testament, biblical and systematic theology, and relevance for today. Check out the site!

I’m also grateful for the opportunity to teach John this year at a West Michigan church, Chapel Pointe in Hudsonville. Twelve studies are scheduled for 6:30-7:45 p.m. Wednesdays, starting Sept 19. We’re planning to continue the series with twelve more studies starting in early 2019. I’ll be presenting information with the goal of transformation, and there will be time for interactive discussion. If you’re in the area, you’re more than welcome to attend. Come on in, the water’s fine!