You are here: Home / Mark / Reading Mark in Context is a great idea! 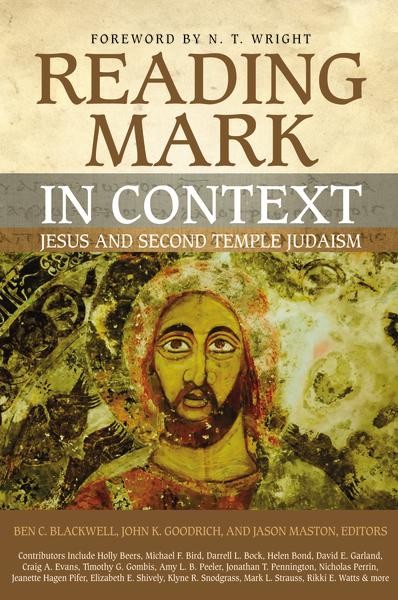 After working mainly with Matthew through the years, it was great to participate with 30 scholars in a project on Mark. Ben Blackwell, John Goodrich, and Jason Maston edited this book, which concisely explains Mark by comparing and contrasting it with relevant passages from Jewish literature of the Second Temple period. That’s what reading Mark in context means in this book. Context is crucial whenever humans attempt to fathom any aspect of their world, and all the more so when they interpret the Bible. This book rightly posits the late Second Temple period setting of Mark, as portrayed in the literature we have from the period, as key to its interpretation.

When Mark is read next to Matthew and Luke, it’s clear that something different is going on. Mark contains relatively little of what Jesus taught, stressing instead what Jesus did. There are few preliminaries: at Mark 1:14 one begins to read about Jesus’ public ministry in Galilee, the part of the Jesus-story which doesn’t begin until chapter 4 of both Matthew and Luke. Mark’s characteristic word “immediately” (8 times in Mark 1 alone) almost rushes the reader from one action scene to the next, maintaining the urgency of John the Baptist’s ministry in fulfillment of Isaiah and Malachi (Mark 1:2-3; Isa 40:3; Mal 3:1). By the time Jesus arrives in Jerusalem and clears the Temple (11:15-19), it’s clear that the source of his authority is a key issue. The Jerusalem leaders ask, “Who gave you the authority to do these things?” (Mark 11:28; cf. Mark 1:21-28; 2:6-12; 3:22-30).

This is where my chapter of Reading Mark in Context comes in. In Mark 11:27-12:10 Jesus stumps the Jerusalem leaders by asking them about the source of John the Baptist’s authority and telling them a story which compares them to recalcitrant tenant farmers. The farmers beat up the landowner’s servants and kill his only son. Mark’s portrayal of Jesus’ “riddling” and “parabling” the Jerusalem leaders is comparable to a text which is formally very different, Enoch’s Animal Vision (I En. 83-90). This strangely fascinating section of Enoch depicts Israel and the nations as animals. The Jewish sheep do not accept the authority of the sheep God sends to care for them, resulting in predators like wolves destroying the sheep, along with their house and tower, which apparently stand for Jerusalem and the Temple. The difference between Mark 11-12 and 1 Enoch 83-90 turns out to be only superficial—both texts highlight the rebellion of Israel’s leaders against God’s authoritative messengers the prophets. Both texts lead up to the destruction of the Temple in Jerusalem. Happily though, in both Enoch and Mark, God overrules the rebellion of his people and ultimately rules over them in peace. As Jesus put it in Mark 12:10-11, citing Psalm 118:22-23,
The stone the builders rejected has become the cornerstone.
This is from the Lord, and it is amazing to us!

Participating in this worthy project with my colleague Tim Gombis and other fine scholars has been a great opportunity. I had already studied the parallel passage in Matt 21-23 in my book Israel’s Last Prophet, so studying Mark’s portrayal of this theme was like coming home again.

If you have interest in Mark, and in the literary world that informed Mark, check out this book! While you’re at it, also take a look at its companion volume on Romans.