You are here: Home / John / The New Commandment, the Old Testament, and Andy Stanley

A New Take on Irresistible Grace 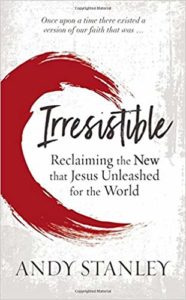 In his recent book, Irresistible: Reclaiming the New that Jesus Unleashed for the World, Andy Stanley discusses the new commandment in the course of his argument that the church should unhitch itself from the old covenant. Stanley’s altogether commendable goal is to help the church reach more people for Christ. He believes that questions and problems related to the Old Testament keep many people from church, and that the church needs to realize Christ totally abolished the old when he brought about a totally new covenant through the cross. Accordingly, if the church jettisons the Old Testament from its message, people will have fewer reasons to resist Christ’s call to discipleship.

There is a two-part interview with Stanley about the book at CT online, as well as a critique by Robert Foster and a reply by Stanley. Michael Kruger has another review of the book at the Gospel Coalition. Tom Schreiner has also posted on the broader theological issue raised by Stanley. My discussion here focuses on Stanley’s view of the new commandment.

A New Sort of Supersessionism
Stanley discusses the new commandment in chapter 15 of Irresistible (pp. 193-200). He argues that the “golden rule” (Matt 7:12; cf. Lev 19:18//Matt 22:39) amounts to treating others according to one’s personal standard of fairness. This lower standard has been superseded—Stanley’s word is “trumped”—by the “platinum rule” or new commandment, which raises the ethical bar to a higher standard based on God’s action in Christ. Here is a key paragraph from Stanley’s online reply to Foster:
As I explain in Irresistible, the OT asked us to base our love for others upon our own standard of fairness—how we want to be treated. Jesus said this was the great commandment of the OT, to love your neighbor as yourself—the golden rule. But then he takes us one step further. Jesus gives us a new and better command, one that’s not based on you or me, but on the standard of love Jesus has shown to us. I call this the platinum rule. Jesus Christ has ended the old covenant once and for all, with all the Old Testament practices, promises, and expectations. We need to stop mixing the old with the new, because God has given us something better in Jesus Christ and his new command.

From the above excerpt, one would think that the New Testament contains a discourse in which Jesus cited the golden rule as the highest Old Testament ethic and then explained that it had been superseded by his new commandment. But no such passage exists; Stanley has blended two separate passages without regard to the context of either passage. Apparently Stanley thinks that Jesus’ “golden rule” sayings are merely descriptive of the old covenant, not part of Jesus’ new teaching for the church. This is untenable because the golden rule is found in the Sermon on the Mount (Matt 7:12), where Jesus explained how his teaching fulfilled Moses and the prophets. But maybe Stanley actually thinks that one saying of Jesus (John 13:34-35) trumps another (Matt 7:12). It’s common to find Christian teachers who argue that Jesus trumps Moses; rarely do Christian teachers argue that Jesus trumps Jesus. Stanley’s approach pits the Johannine Jesus against not only the Synoptic Jesus, but also against Paul (Rom 13:9; Gal 5:14) and James (2:8), who both cite the golden rule as central to biblical ethics. 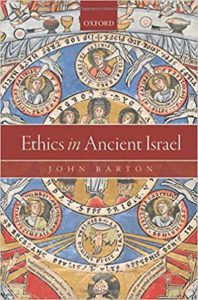 Stanley is simply mistaken when he says that the Old Testament love ethic (Lev 19:34; 20:26) is based on “one’s personal standard of fairness”. The foundational truth that humankind was created in God’s image (Gen 1:26-27; 5:1-2; Ps 8:3-8) means that people are accountable to represent God’s character, not their own standard of fairness, as they steward God’s world. When we read the key text in Leviticus 19, it’s striking how the initial general command in 19:2—”Be holy for I am holy”—is followed up with specific commands punctuated by the repeated formula “I am the Lord.” The repetition of this formula (14 times in Lev 19 alone, including 19:2 and 19:34) ties each specific command back to the initial general command, reminding Israel that they are to be God-like in every area of their behavior. The ten commandments are similar in that they are introduced with the statement “I am the Lord your God” (Exod 20:2; Deut 5:6). This links Israel’s behavior to God’s character and covenant, showing us that the “golden rule” is a God-centered ethic, not at all an ethic of treating others by one’s personal standard, which amounts to little more than “let your conscience be your guide.” 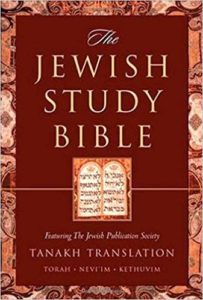 Deuteronomy 10:17-19 is also crucial for this discussion. Like many OT texts, this passage enjoins Israel to treat orphans, widows, and strangers fairly. God’s compassionate treatment of such people (10:17-18) is the model for Israel’s behavior (10:19). Israel is also reminded in 10:19 that they were formerly strangers in Egypt. Reminders like this are often viewed simply as calls for human empathy—Israel knows that being a stranger is tough because they were strangers in Egypt. I think there’s much more going on here. Israel is being reminded that they experienced God’s compassionate love when they were strangers in Egypt. Accordingly, they must now extend the same compassion to the strangers in their own land. Deuteronomy 10:19 and similar texts are more about divine compassion than human empathy. God’s love for Israel in Egypt is the model for Israel’s love for orphans, widows, and strangers. The Jewish Study Bible (pp. 388-89) catches this well: “human social ethics amounts to imitatio dei. . . . Love of neighbor thus originates in divine action as ethics receives a theological foundation.” OT theologian John Barton develops this ethic of imitating God in Ethics in Ancient Israel (OUP, 2015, 263-72).

Biblical ethics as imitatio Dei originated with Yahweh’s action in the Old Testament. As the Israelites were to imitate Yahweh, so Christians are to imitate Jesus, Yahweh’s ultimate agent. The recipients of God’s transforming love are to become agents of that transforming love. Mimicking God’s character and action has always been at the heart of biblical ethics. The new commandment is new in the sense that Jesus’ love for the disciples is the most recent and the most complete revelation of God’s love (John 1:14-18; 3:16; 13:1). Just before he gave the new commandment, Jesus washed the disciples’ feet to model what their own reciprocal love should be like (John 13:12-17). Soon he provided the ultimate revelation of God’s love by going to the cross (cf. Matt 20:25-28).

An Older Approach to Newness

My late friend and colleague Carl B. Hoch Jr. wrote about the new commandment in All Things New: The Significance of Newness for Biblical Theology (Grand Rapids: Baker, 1995), pp. 137-47. Carl pointed out the continuity of John 13:34 and Leviticus 19:18, and went on to note five ways in which Jesus’ commandment is new:

“As long as Christian love is still in the world, the world is still encountering Jesus.”
Raymond Brown, The Gospel of John (2 vols, Anchor Bible, Garden City: Doubleday, 1970), 2.614.