You are here: Home / Bible Lands / Israel is Real 2019
I’m excited that Beverly and I have the opportunity to go to Israel together again this year. We are participating in the GRTS 2019 Ancient World of the Bible Study Tour of Israel, Palestine, and Jordan. Prof’s Jonathan and Jennifer Greer lead this annual tour. You can find daily posts by GRTS students here and at #grtsIsrael.

Why go to Israel?

Why go to Israel? This is not a difficult question. To know Jesus as a person and follow him faithfully, we need a book, the Bible. To know the Bible and understand it well, we need to know the land of the Bible, Israel. Although it’s possible to know about Jesus apart from reading the Bible, and to understand Bible basics apart from knowing the land, why be satisfied with a shallow understanding of either?

The Advent/Christmas season reminds us that God has invaded human history in the person of Jesus, the Word-become-flesh. Jesus lived in Israel as a brave prophet who trudged over a rugged land, showing and telling people about a new way of life under God’s reign. Jesus was not an effete guru mumbling esoteric platitudes to take people’s minds off their earthly life and its troubles. His followers should not be escapists who long to lounge on heavenly clouds and pluck harps. (Guitars are much cooler anyway) Rather, Christians meet life on earth with all its troubles head on, empowered and taught by Jesus’ example. This worldview calls for a close relationship with Jesus, one based on the Bible understood in its original setting. We go to Israel to walk where Jesus walked.

Going to Israel affirms the incarnation of God in the person of Jesus of Nazareth, who lived, worked miracles, taught, died for sinners, and was raised from the dead. As he once lived on this earth in Israel, so he will return in glory to finish his redemptive work. Going to Israel opens up new perspectives on life in Christ. Going to Israel opens up the ancient, distant parts of the Bible to our understanding, and it helps us understand the current turmoil that we hear so much about on the news. So, why not go to Israel?

Israel is located at the eastern shore of the Mediterranean Sea. In biblical times this was a strategic crossroad of several major international trade routes. World powers, like Aram/Syria to the north, Babylon and Assyria to the east, Egypt to the south, and Greece and Rome to the west, vied for control of Israel. The Bible and other ancient historical sources portray constant political tension and frequent warfare over this region. Due to this Realpolitik, Jim Monson called Israel The Land Between. Monson pointed out that Israel’s strategic location, coupled with its limited natural resources, led to the “holy land” being a testing ground of faith. Israel’s very existence hung on whether it acknowledged God and his covenant.

Visitors are typically surprised to learn how small Israel is. The entire modern state of Israel could be laid over Lake Michigan and there would be plenty of water visible around the edges. It is only sixty-four miles “as the crow flies” from Nazareth to Jerusalem, and only five and a half miles further south to Bethlehem.

The quick changes in Israel’s topography also surprise many visitors. If you compare the 3-D map just above to the Geobasics map further above, you can see the northeast to southwest orientation of the topography of Palestine. The coastal plain near the Mediterranean transitions into the foothills (known as the Shephelah) of the central mountain range to the east. Further east, this mountain range drops off steeply into the Judean wilderness and the Jordan River valley, a major geological rift. It’s only about 15 miles from Jerusalem east to Jericho, but Jerusalem is about 2500 feet above sea level, and Jericho is about 850 feet below sea level, making it the lowest city in the world. No wonder Jesus’ parable spoke of a man who went down from Jerusalem to Jericho! East of the Jordan there are mountains on the west edge of a plateau that stretches from the lower Golan in the north to Edom in the south.

Access to water is key to any civilization, ancient and modern alike. Generally speaking, rainfall in Israel is more plentiful in the north than in the south. Very little rain falls on the eastern slopes of the central mountain ridge, which is gashed in the Judean wilderness by deep valleys known as wadis, which are flooded with water in the rainy season but mostly dry otherwise. Jesus may have had a locale near such a wadi in mind when he spoke of the foolish man who built his house on the sand, only to see it washed away in a flash flood (Matthew 7:26). With such a rugged topography and arid climate, no wonder the psalmist spoke of a deer panting for streams of water as a metaphor for desiring God (Psalm 42:1). These vivid images drawn from the land of Israel picture two lifestyles, one which endures life’s droughts and floods by desiring and depending on God and the truth of God’s word, and sadly, one destroyed by the same difficulties due to neglecting God and God’s word. There is much to ponder here.

Why come back here during the next ten days? 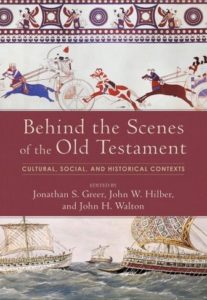 I hope this brief intro explaining the value of understanding the land of the Bible has been helpful. I’m planning to post on a key site from each day of the trip, explaining how it impacted my life as a follower of Jesus and my understanding of the Bible. I believe you will find these ongoing posts to be helpful to your own walk with God and Bible reading. And if you are not able to go to Israel, make sure your Bible study includes resources on the land of the Bible. These would include a good study Bible, Bible encyclopedias, atlases, and books on Bible backgrounds, such as the one pictured here.

By faith Abraham, when called to go to a place he would later receive as his inheritance, obeyed and went, even though he did not know where he was going. By faith he made his home in the promised land like a stranger in a strange land. He lived in tents, and so did Isaac and Jacob, who were heirs with him of the same promise. He did this because he was looking forward to the city with foundations, whose designer and builder is God. (Hebrews 11:8-10)

__________
* This point is well taken, but I’ve not been able to trace it to Jerome. Ernst Renan actually did speak of the land as a fifth Gospel (un cinquième Évangile) in his book Vie de Jésus, 13th ed. (Paris: Michel Levi Freres, 1867), p. XXIV. I thank my colleague Dr. Byard Bennett for this reference.