You are here: Home / John / Love one another: A one-hit wonder and Jesus’ greatest hit. 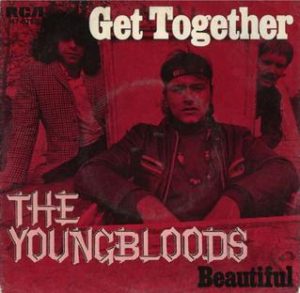 The “new commandment” (John 13:34-35) is one of Jesus’ most well-known sayings. Of course, the sentiment that people should love one another has been a constant theme in pop culture since the hippie movement of the 1960’s. The opportunity to speak at a recent Grand Rapids Theological Seminary chapel service gave me a chance to reflect on the unique power of Jesus’ teaching that his love for his followers is the model of their love for another. I’ve tried to unpack that in this post and in the sermon I’ve linked to it.

One of my favorite songs from the 1960’s is “Get Together.” Written by Chester William Powers Jr. (aka Dino Valenti), it was originally recorded in 1964 by the Kingston Trio, and later by a diverse array of bands, including the Carpenters, the Dave Clark Five, the Jefferson Airplane, and We Five. The 1995 reggae version by Big Mountain is ok, but it’s clearly a remake of the definitive track by the Youngbloods, which remains a staple on oldies radio. It was originally released with limited success in 1967, but when it was used in a radio spot for the National Conference of Christians and Jews in 1969, it gained a much greater audience and rose to #5 on the Billboard Hot 100 chart. Its popularity was extended by its use in several television and film soundtracks, most prominently in 1994’s Forrest Gump. But like the Oneders, the Erie PA band in Tom Hanks’ next film, That Thing You Do (1995), the Youngbloods had a couple other songs barely make the charts, and broke up in 1972. 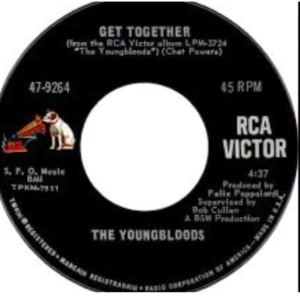 The Youngbloods (Jesse Colin Young, Jerry Corbitt, Lowell “Banana” Levinger, and Joe Bauer) had a unique guitar sound on the song’s riff and solo, along with a prominent bass line and beautiful harmony vocals. I’ve always thought that my favorite group from the 60’s, the Byrds, should have recorded the song. David Crosby’s pre-Byrds demo failed to impress, maybe because it used the riff from the Beatles’ Twist and Shout instead of Roger McGuinn’s Rickenbacker 12-string’s jingle jangle. Nice to see someone agrees with me that the Rickenbacker was made for Get Together.

Get Together’s lyric blends the sentimental and the spiritual. If people get together in love, the mountains will ring; if not, fear will make the angels cry. There’s a mix of biblical themes in which Ecclesiastes meets eschatology:

Some may come and some may go.
We shall surely pass
When the one that left us here returns for us at last
We are but a moment’s sunlight
Fading into grass.

Human mortality and accountability to a higher power “who left us here” leads into the refrain:
Come on people now,
Smile on your brother.
Everybody get together
And try to love one another, right now!
As the song ends the urgency of loving one another is highlighted in a stirring crescendo which repeats the exhortation “right now” three times. OK, we get it.

The song’s sentiment is commendable, and if online comments on various posted videos can be believed, it still inspires people to live better lives. Yet the old problem of whether people can pull themselves up by their own bootstraps remains. Can the world be changed simply by urging people to change it? To some extent, yes, due to what reformed theology calls “common grace.” People were created in God’s image, and by God’s grace many people “do the right thing” much of the time. I’m thankful that people are not as bad as they could be, but pleas for people to love one another, even eloquent ones accompanied by cool 60’s folk-rock music, fail to persuade the masses. How did the 60’s hippie movement turn out? John Lennon was right, it’s easy—”All you need is love”—but it’s not easy to find such love. Lennon tells us nothing about that. How do we get there from here?

What makes Jesus’ message radically different than Get Together’s is that it transcends mere sentiment, even a lofty and eloquently expressed sentiment. The church isn’t just another fan club and Christians aren’t Jesus-groupies. Jesus’ message is rooted in his saving actions; it is energized by his example: “love one another as I loved you.” Jesus obeyed the Father by putting his entire life on the line for his followers, and he taught them to do likewise. He had just washed their feet, and he was about to die for them. “He loved them to the end” (John 13:1). Their imitation of his self-sacrificing love was to draw people’s attention to him, his message, and his mission: “By this everyone will know that you are my disciples” (John 13:35). Those who feel warm and fuzzy when they hear Get Together are not moved to model their lives after its author, Chet Powers. Those who feel warm and fuzzy when they hear Jesus’ words have only begun to get his message. They are being called to the imitation of Christ, to obey his commandments, and to join him in mission. Who would have thought that simply loving one another as Jesus loves us is the ultimate apologetic? And if we wonder what such love looks like, we need only look to the end of the farewell discourse, where John 17:20-26 makes it clear that our unity is what demonstrates the authenticity of our love. 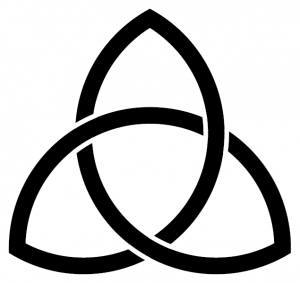 One More Thing
When we read John’s Gospel more closely, we learn why loving one another as Jesus loved us is a powerful message to the world. It’s because Jesus loved us in the supernatural way the Father loved him. We see this in texts like John 15:9-17 and 17:20-26 which boggle our minds by asserting that when Christians love one another, they are mimicking the reciprocal love and unity shared by the Father, the Son, and the Spirit. Theologians articulate this triune love in terms of the “social trinity,” a perichoretic relationship in which the Father, Son, and Spirit share not only in the divine nature but also in the divine community. Their creative and redemptive actions are not the solo moves of three individualistic deities but are the interpersonal work of team trinity. 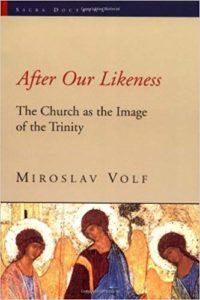 As Jesus-followers, we are equipped and called to follow this example. Loving one another as Jesus loves us is loving one another the way the Father loves Jesus. God created humans as image-bearers, and our redemption in Christ forms us as a renewed community which is to relate to one another in a manner similar to the way the Father, Son, and Spirit relate to one another. If this seems impossible, think of other divine attributes that Jesus-followers are called to mimic, such as mercy, justice, and holiness. No doubt we mere finite creatures cannot fully imitate our infinite Creator, but the Creator calls his redeemed creatures to be like him, and this includes our interpersonal relationships. When Christians take their community relationships seriously, as Miroslav Volf put it, the church becomes the image of the trinity.

I preached on this idea of the church as a perichoretic community at a recent Grand Rapids Theological Seminary chapel service. If you’d like to continue thinking about this topic, listen to the sermon, and look at the accompanying powerpoint.

When you obey my commandments, you remain in my love, just as I obey my Father’s commandments and remain in his love (John 15:10, NLT).